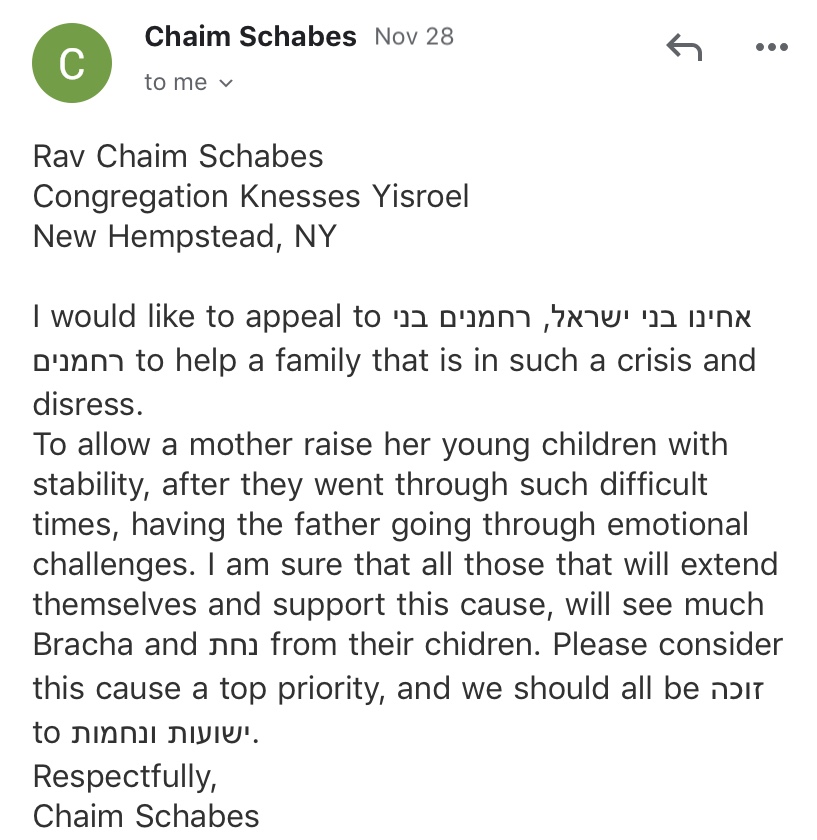 A young mother asks herself:

’Will my kids understand that Totty still loves them? Will we be homeless? Will I be able to provide for our children? Will his mind be forever gone from reality?‘

Stress triggered a breakdown 3 years back and a second one, as well as hospitalization has been an on and off occurrence since.

The children are close with their father and are too young to comprehend why Totty will play with them one day but is gone the next. Treatment has been affective for now.

With a third breakdown on the horizon, Their mother scrambles to see if she can keep her husbands health afloat for the children, as well as provide for her young children financially and keep the roof over their heads while also running errands, earning credentials to provide for her family independently if need be, and the daily parental duties of changing diapers and calming tantrums 24 hours a day, 7 days a weekworking from home is the only option for now, as a job away would only pay for childcare.

But with mounting tuition, a broken car brake and engine, a computer that needs replacement for work to continue at home, doctor appointments to try to have a chance to save her husband, father of her children, and therapy to deal with the trauma, among other piling costs, both the future and stability is an unknown.

It isn’t easy to be on the receiving end, but with the main breadwinner not guaranteed, and the health of a father not a promise, reality necessitates this request.

Every penny counts, and your contribution can and will keep these young children off the road of further trauma and afloat financially until a ends are met on their own.

Thank you, from the little hearts of children and their mother alike.

Update: third breakdown has occurred. Although working, a refusal to pay bills (tuition or rent) has been threatened as a result of an altered state of mind by an otherwise kind man. Two walls of the house have been ripped with hollow holes, (thermostat and WiFi have been uprooted and missing as a result) tore up most of the furniture with scissors, cracked all of the girls dollhouse, toys, clothing armoire etc, and more. An image of happiness has been painted for the kids to believe they're things will be renewed without an idea of how. They were told it was done by accident.

The father is currently in Jail. The children are kept oblivious as much as possible, but at some point, they will ask where Totty is...

{Update #2 : With the kind of help of strangers, the thermostat and WiFi was fixed. the Computer has been replaced, and a solution has been found for the vehicle. A huge thank you, every kind word and kind deed has reached the hearts of mother and children alike.}

{Update #3: After being bailed out of jail by a family member, allowing further havoc, rearrest and a month long hospital stay, He was released. Forgoing outpatient continued treatment, he has fled the country.

The kids miss their father dearly and it has become harder to explain his absence.

Left with the heart wrenching choice between the children traumatized by his illness or by his absence, the absence was the more safe option.

The mother was hoping for the children to reunite with their father following compliance with treatment and successful treatment.

But as he has gone overseas citing intent to make Aliyah and proving still affected by his ailment, it is unknown of whether the kids will see their Father ever again.

‘Totty is not feeling well and when he feels better he will come home’ is slowly expiring as a convincing explanation, when more than 4 months of absence have already gone by. The mother is trying to keep up the image to the kids that Totty is still their Superman who they look up to dearly and while his absence retains that image for now, eventually the news will have to be broken more concretely.

Additionally, a false rumor has been spread about divorce. However, they are still married, both in civil terms and in religious terms. The separation is only due to a difficult decision to protect the children rather than expose them, as well as due to imprisonments, hospitalizations, and now fleeing on part of the illness that has stolen a husband and father from his family who miss him dearly.

Please daven for a miracle for ישראל שימעון בּן אידיתּ רחל for a miraculous And speedy recovery.